Let's get that piece of zit! 👀

Acne is generally considered a synonym for 'insecurity'. Am I right, ladies? And let’s face it, relationships and insecurities don’t mix very well together. Then, what to do, how to tread? Let’s break it down.

Whether you’re in a new relationship or an old one, acne can come in the way - in the form of loud, talking pimples. And we as people, get so consumed by it and think it’s the only thing this other person is seeing. Mainly because it hurts like a mofo and that in itself is a constant reminder, but girls with acne also know that it’s a thing that’s just. constantly. there.

For example, oh what it feels like to be in a new relationship! The butterflies, the tingles, the talks, the walks. Everything is so exciting in the beginning..until it’s not. Until you begin to imagine that you maybe caught him eyeing your skin, or when you start to think you’re not as hot as the other girls on his Instagram or when you get too conscious sitting in the car with your bad side towards him or when you can never imagine going for a swim in the beach and having a good time. There’s always the issue of your skin in the back of your head. Isn’t there?

The stress of starting a new relationship is enough to erupt a breakout, which can then increase your sense of self-consciousness and make you feel guarded during moments that you could otherwise spend being open with this new, special person. So you put on your game face and your best outfit and act like you know you’re hot (which of course you are!). The dilemma though is that at the same time (if it’s serious) you also want them to know that this is you, this is what you deal with. You can’t have your game face on forever!

Speaking of game face, with the emphasis on being makeup-free now (guilty!) and embracing your skin and loving your skin for what it is, is a strong act of self-confidence, but when you actually do put yourself to the test in front of someone new and exciting, it makes you realize how big (not to mention revealing) of a move it can be. Especially for girls who get newly married – me included – and realize they have to be around their spouse (at least in bed) make-up free and how hard it can be to feel pretty with nothing but your skin on.

I would go through this in the early days of my marriage. Covering up with concealers, with hair, with a dupatta, duvet, anything! Maybe I wouldn’t have been so worried if it weren’t for the fact that my chin became a breeding ground for double headed monster breakouts who my husband had names for. But yes, having acne and a man at the same time can be hard.

Point is – yes, relationships with insecurities is a b*tch. BUT here’s a little secret which I’m sure ya’ll knew but needed to be reminded of: everyone has them! EVERYONE is dealing with their own insecurities. If it’s not your skin, it’s your nose, or crooked teeth or big ears, thin hair – it never stops. HE is also worried about his slightly big tummy and a fast receding hairline. Makes you think, acne is a flaw like ANY other. It’s so so important to remember that and to remind yourself of that from time to time.

Acne gets a bad rep. But ladies, please remember, it’s just any other thing. Maybe even something that makes you different, adds more character to you, gives you a story – use that! We are consumed by it. But our partners are NOT. Also thank goodness for times these days where perfection is considered boring anyway and men are woke enough to understand that. 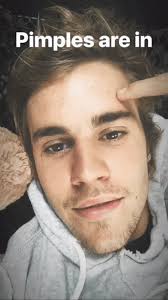 My advice to all of you troopers:  Find yourself a man (or woman) who finds videochatting with you while you have your spot treatments on cute! Someone who sees you for you and sees all of that beauty. Someone who gives you confidence in yourself. Someone who doesn’t care about your breakouts. You don’t deserve any less than that!

Also my advice: ban anyone who gives you unsolicited and profoundly dumb skin-care advice.