Let's get that piece of zit! 👀

When to replace your Poofer

One very common mistake that people make while using the dermaroller is that they don’t replace it when it needs to be replaced. After a certain amount of use, you must change your Poofer. It’s important because the needles can wear out after several uses – even if the naked eye can’t see it. The needle bends a little after each use.

Here is a head of an insulin needle (similar to dermaroller needles) under a microscope. This should give you an idea of how use affects the needles. 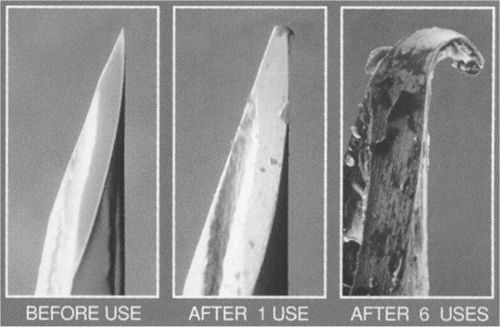 Over time, needles can also accumulate bacteria that alcohol can’t disinfect, they can get blunt or sometimes, they can bend because the needles are so fine. It’s important to use only sharp, straight needles to prevent unnecessary skin traumas. There can also be a risk of infection when using old dermarollers as bacteria may have built upon it. So ladies, trash that dermaroller if you’ve had it for a while.

Some good signs to know when to change your dermaroller are as follows:

As an ending note, please be extra careful when it comes to replacing your dermaroller because we don’t want it to do more damage than good. We only get one skin and we will treat it well!